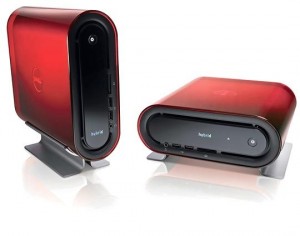 I admit. I think that computer is pretty cool looking. I certainly wouldn’t mind having one sitting on the corner of my desk. But, I doubt it runs OS X. So, alas, I won’t be using it anytime soon. But, I do have to wonder, why has it taken computer manufacturers, especially PC makers like Dell, so LONG to move beyond the beige box.

Design gurus have been saying for years that consumers would love stylish PCs – and pay more for them. I guess when you’re on the ascendancy, and selling millions of boring beige boxes every year, you don’t really stop to experiment with design. The incremental sales increase of a stylish design wouldn’t matter all that much when you’re phone is ringing constantly with new orders.

But once those sales have peaked, you’ve got to find something to distinguish your commodity boxes. And, so Dell launches a stylish PC.

The first computer I was ever aware of was the Apple II which was originally released in 1977. My brother was in high school at Mt. de Sales Academy, a Catholic High School in Macon, Georgia. I remember my brother Tony talking about this new computer, and I have a memory of seeing the Apple box that the computer came in with that distinctive multi-colored Apple. I also have a dim memory of seeing either a Time or Newsweek with Steve Jobs on the cover. 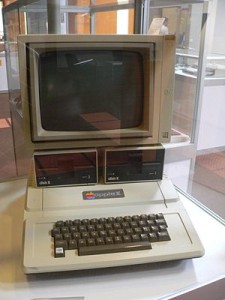 The first computer I ever owned was a Radio Shack Color Computer. Check out this vintage ad featuring none other than Isaac Asimov. 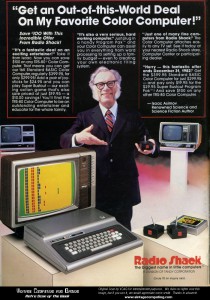 It’s amazing that it took 30 years for computers to look as stylish as the Dell Studio PC noted above. I know, I know, Apple has been making stylish machines for years. I’m typing this on a MacBook Pro. I bought a MacBook about 2 years ago, and I’ve never once regretted making the switch. I spent years and years dealing with blue screens of death.

I do wonder what kind of computing devices my sons Zachary and Noah will be using. I’m sure they’ll be small and mobile, and I bet they’ll probably be using some type of Tablet style machine with Touch controls when they need to work on a document or file not suited to a tiny, handheld device.

2 Replies to “Um, what took you so long”