John Gapper, a Financial Times writer, has written an interesting article about Sony’s fumbled Sony Reader. Gapper makes some interesting points and argues that Sony Reader’s lack of a wireless connection has doomed the device vs. the Amazon Kindle.

While I agree with much of Gapper’s article, I don’t necessarily agree that all is lost for Sony. However, for the Sony Reader to go head-to-head with the Kindle at this point, it would take a passionate, fanatical executive in charge of the Sony Reader team.

Here’s my prescription for the Sony Reader not to be an also ran vs. the Kindle:

Celebrate the design – Have you seen the Apple vs. PC commercials that have blanketed the TV and web for years now? Sony should follow Apple’s lead and immediately launch a marketing campaign celebrating the Sony Reader’s design vs. the Kindle. Would you rather pull the sleek Sony Reader out when you’re on a plane or in a meeting, or would you rather pull out the Kindle which could be mistaken for a 1980s PC keyboard chopped in half. And, if the Sony Reader team doesn’t have the budget for TV commercials (which I doubt they do), record some video spots on the cheap and get them on the Web tomorrow.

Well, if you have tried the Sony client software for the Sony Reader, that probably has something to do with your early onset balding. You’ll pull whatever hair out of your head trying to use the Sony Reader software. I’m not a software engineer, but this needs serious work. Is it possible to scrap the client software all together and log in via a secure web page for your Reader downloads? Maybe that’s the way to go vs. trying to fix the Sony Connect client.

RSS – Currently, the Sony Reader supports limited RSS feeds. Going back to marketing vs. the Kindle, Sony should be crowing about the fact that they’re not charging for RSS vs. the Kindle’s nickle and diming RSS strategy. Also, open it up. Set up feed software that enables me to grab any RSS feed out there for the Reader – not just the RSS feeds that Sony has chosen.

Additional content – Sony should be adamant about not allowing Amazon to take the lead with more books available. If Amazon announces a new digital rights deal with a publisher that Sony doesn’t have a contract with, that contract exec noted above needs to pull out his tent and prepare to camp out in the publisher’s office until Sony has an equal deal. And, try to take the lead with the number of ebooks available on the Reader vs. the Kindle. Right this minute, there are probably more than a hundred literary agencies in NYC sitting on a goldmine of digital rights. Sony should be meeting with all of those literary agents to get thousands, hundreds of thousands, of long tail, out-of-print novels available for the Sony Reader.

In addition, Amazon has set up a process for authors, and others, to publish their own content digitally and make it available for the Kindle. Sony needs to set up a similar process. Right now, I can load a PDF on my Sony Reader. The formatting doesn’t always work great. But, there should be an easy way that I can upload a PDF and push it to the Sony store – or even push it to other select Sony Reader users. That would be a wonderful selling point for sales forces everywhere. Salespeople would no longer have to carry around briefcases bulging with documents and catalogs. It could all be stored on the salesforce’s Sony Readers.

Well, that’s all my ideas for now. Regardless of what happens, it will continue to be interesting to watch Sony’s competition against Amazon. Sony may have taken a few lumps, but they’re not out of the game by any means. 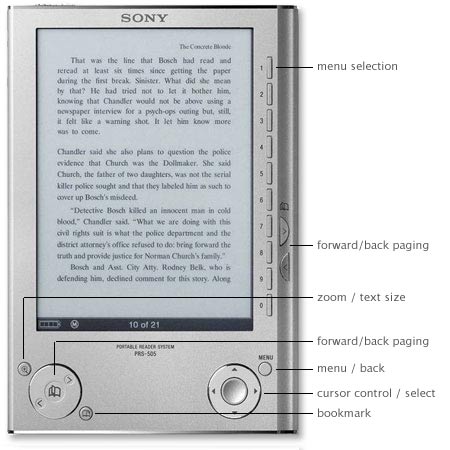