At Podcamp Boston on Saturday, I mentioned to a couple of people an idea that I don’t think gets a lot of attention – social media self-consciousness.

I was talking to someone on Saturday who had been thinking about starting a podcast, but for whatever reason hadn’t reached a point where he was ready to pull the trigger. He did mention that he thought podcasting would be more comfortable for him, because he had tried writing a regular blog, and he was very self-concious about his writing ability, and he eventually lost steam on blogging due to his self-consciousness about his writing abilities. I can relate to that feeling of self-consciousness – not necessarily about my writing ability but more about revealing myself to anyone who should stumble across my blog online. 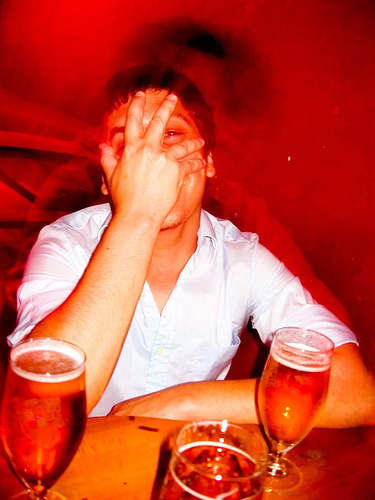 There have been numerous articles, including my blog posts ironically, about the importance for companies to participate in social media. It’s not all that hard to participate in Twitter – responding to people’s tweets, forwarding or retweeting other tweets, and posting links to interesting stories. In many ways, Twitter is akin to a high-volume broadcast version of truncated emails. And, ever since I got into PR in 1997 or so, I’ve lived and breathed email every day.

And, It’s not all that hard to participate in Facebook either. Posting photos, commenting on other people’s photos, posting links to interesting news articles, commenting on other people’s posts, and, of course, deleting over and over and over again people’s weird icons, sheep, mafia wars updates that come my way[this is not a sentence – I would reword this to make it into a sentence].

However, blogging, for me has been different. Over the years, I’ve often avoided writing a regular blog. Sure, I have had plenty of thoughts and opinions about public relations, technology, the impact of digital media on book publishing, etc., but for some reason a crippling modesty – or even shyness -– has kept me from blogging about my ideas. I’m certainly confident about my professional abilities – working with companies to identify the stories that they want to tell about their business and products, then distilling that information into timely, news worthy announcements designed to garner news coverage. And, I’ve always felt very comfortable stating my opinions to clients, giving them unvarnished feedback about their PR ideas and campaigns.

Yet, despite that confidence in my professional abilities, blogging felt foreign to me. I would try, and it would never feel “right” to me. The self-revealation aspect, posted online so that any one in the world could read what I’d written, constantly inhibited me.

Possibly it’s generational. I’ll be the first to admit that I consider myself on the cutting edge of technology and gadgets. I waited in line for an Xbox 360, a Wii, an iPhone, and other brand-new gadgets. Yet, the first computer I ever owned was a Radio Shack color computer – hooked up to an old television for a monitor.

While I’ve always embraced technology, the self-revalatory nature of blogging – while natural for digital natives – has felt awkward and presumptive to me.

Finally though, I realized I needed to join the online conversation more overtly by blogging on a regular basis. I can’t remember a specific watershed moment for my decision. It has been more of a gradual change and a constant process of reminding myself that I do have ideas to contribute (not to sound too much like Al Franken’s Stuart Smalley character on Saturday Night Live).

With all this personal background and info, I think it’s something to definitely think about as social media grows – some people for whatever reason are self-conscious about their social media participation.

Christopher S. Penn, one of the co-founders of Podcamp Boston, just blogged about a somewhat similar issue – breaking the shackles of your potential. It’s a great blog post that I recommend you take a look at.