Readmill is no more. Berlin-based Readmill announced that Dropbox acquired the company, and the Readmill app is being discontinued.

When I opened and read the email announcing the shuttering of the Readmill app, it was a punch in the gut. Readmill was an interesting and innovative alternative to the Amazon Kindle hegemony or monopoly.

It’s a moot point now, but Readmill offered synced eBook apps across multiple devices. Once you set up a Readmill account, you could add unlimited ebook documents – ePub or PDF – to Readmill’s cloud servers, and access those documents from phone or tablet via the Readmill app. In addition, Readmill was innovating with social reading. Kobo has made noises about social reading. Amazon too. Readmill was hard at work building a social underpinning to reading. You could follow people via Readmill and see their annotations, what they were reading (if they chose to share their reading choices publicly), etc.

Even if you never used the Readmill app, we’re all losers in the end. While Dropbox aquired a talented team, the eBook ecosystem lost a thriving, innovative company – an alternative to the Amazon Kindle ecosystem. 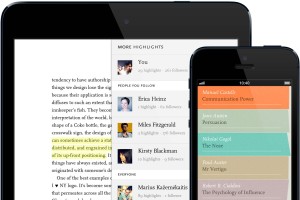 I don’t have an issue with Jeff Bezos or Amazon. My concern is watching the eBook industry in the U.S. creep closer and closer to a monopoly – dominated by one company. Amazon.

What did Jeff Bezos and Amazon do right? If you’ve followed the publishing industry over the past 10 years or read Brad Stone’s The Everything Store: Jeff Bezos and the Age of Amazon, you know that Amazon drug the book publishing industry into the digital age kicking and screaming. Sure, you can sit and debate, “Oh, eBooks were inevitable, and publishers would have figured out their digital futures.” But, the fact remains, through Bezos’ iron-willed determination, he created the current eBook marketplace much faster than any NYC publisher or competing eBook retailer would have.

Sony had a competitive eBook reader on the market prior to the first Kindle, but it wasn’t marketed well, and Sony’s corporate decision makers didn’t have the balls to include an always-on wireless connection. Bezos knew that including built-in, free wireless in the first Kindle would eliminate any barrier to purchases, and Kindle marketing and advertising trumpeted the fact that you could download a book and begin reading with 30-60 seconds. Some Sony “suit” looked at a spreadsheet and said, “There’s no way we can underwrite built-in wireless in our devices.” Bezos looked at a similar spreadsheet along the way, and I’m sure let loose with one of his trademark howls. Who won? Sony just abandoned the U.S. eBook market and handed all their customers to Kobo.

With Readmill’s demise, now we’re down to Kobo, B&N’s Nook, and Kindle. B&N is reeling back and forth like a punch drunk boxer, and who knows if Nook will end 2014 as a viable, independent company at all. The Riggios were never prepared to compete with Bezos and that has been clear in almost every business decision they’ve since Amazon first launched. Once Apple’s price-fixing strategy crumbled, their iBooks business has floundered.

Kobo is owned by Rakuten, a Japanese e-commerce company. At this point, the only thing standing in the way of an almost inevitable Amazon eBook monopoly is Rakuten. We can only hope that Rakuten has the stomach for long-term investing and business building that Bezos does. Regardless, Kobo seems to be floundering in the U.S.. Kobo’s partnerships with U.S. independent bookstores was a smart move, but I don’t get the sense that those stores are making a ton of traction with consumers. Amazon’s Kindle has become the de facto eBook reading device.

Within that eBook landscape, it was nice to see Readmill building and innovating, and that’s why it’s such a dissapointment to see them dissapear.

You might be asking, “Why shouldn’t Bezos and Amazon succeed, and reap the benefits for their investments, their willingness to lose money initially on Kindle devices with built-in wireless ordering, their commitment to eBook publishing and dragging publishers into the digital age by insisting on publishers digitize their backlist books, etc.?”

I don’t think they shouldn’t succeed. They should be applauded for everything they’ve done to usher in the eBook era.

However, monoplies stifle innovation. And, concentrating the power of distribution into the hands of one digital gatekeeper is a dangerous thing in the realm of books and ideas.

Here are a couple of examples:

1984-gate: In 2009, someone illegally uploaded a copy of the Orwell novel and made it available as a Kindle title. When Amazon realized that their publishing team had allowed someone besides Orwell’s licensed publisher to publish the popular novel, Amazon remotely deleted 1984 off of users’ Kindles. In the public uproar that followed, Amazon promised to never do that again – to delete material off of a person’s Kindle device.

However, the capability still exists. What if someone published an expose about the working conditions in Amazon warehouses via Kindle? Would Bezos and team delete the eBook from users Kindles? They say they won’t, but there is precedent for Amazon to delete material, after purchase, from a users Kindle.

Editorial gatekeeper: Self-publishing is thriving via Amazon Kindle. Aspiring writers around the globe have published their own novels via Kindle, and some have become bestsellers in the process. Again, this is a huge positive benefit of eBook technology. And, Amazon should be applauded for bucking conventional book publishing tenants to give self-published writers equal access to Amazon customers as “traditionally published” writers.

With the demise of Readmill and alternative eBook reading apps and platforms, as more and more of the eBook business gravitates to Amazon, do we want one company controlling what we read, and with the ability, and impunity to remotely delete eBooks from our eBook devices and apps? I don’t think so.

And, finally, innovation. Amazon is an innovative company. Innovation is steeped into the company culture. It’s obvious that Amazon is not concerned and absolutely rebels at the phrase, “That’s not how things are done.” Amazon has repeatedly chafed at that type of limited thinking, and Amazon has profited and excelled as a result.

Historically, however, monopolies inhibit innovation. Microsoft is only the latest example. Microsoft competed, innovated, and fought hard to establish themselves as the dominant computer software company with an operating software monopoly. As a result of protecting their existing, monopoly business, Microsoft didn’t have the intestinal fortitude as a company to predict and react to the mobile computing revolution.

If Amazon has an eBook monopoly, eBook innovation will wither for many years. Amazon won’t be inclined to innovate at the same pace, because doing so may disrupt their own eBook dominance.

With Readmill’s passing, let’s hope for an eBook competitor somewhere on the horizon. At this point, given the commercial realities of the current U.S. eBook marketplace, that eBook competitor will most likely have to come from the world of open source software.

While we wait for that alternative, we can support a variety of efforts aimed at preserving digital books in multiple formats beyond Kindle’s proprietary mobi format – efforts such as Project Gutenberg, the Digital Public Library of America, Singularity & Co., etc.