In the latest eBook news, yesterday the New York Times reported on a new Google eBook initiative – separate from its book scanning project. Google is in discussions with many book publishers to sell eBooks direct to consumers via Google. As publishers continue to fret over Amazon.com’s $9.99 pricing for eBooks that are currently available in hardcover (at higher price points), the story pointed out that Google has made it clear that publishers will be able to set the pricing for their eBooks.

Meanwhile, the latest Fortune magazine has a glowing cover story about Amazon’s Kindle, and the launch of the Kindle DX – a large-screen Kindle.

Despite Amazon’s success with the Kindle thus far, the Kindle’s only differentiation at this point is wireless connectivity. Admittedly, the ability to instantly download a title that you’ve heard about on NPR or read about in your morning paper drives unbelievable impulse purchases. And, those impulse purchases, are surely adding to the Kindle’s financial success thus far.

But, that wireless advantage could be short-lived. Ultimately – in the next 18 months – a competitor, Plastic Logic or Sony, will introduce an eReader with wireless connectivity. And, lurking in the background, is the 500 pound gorilla of well-designed consumer electronics – Apple. There have been plenty of rumors about a much larger iPod touch scheduled to be released. Regardless if Apple launches a larger iPod touch, as netbooks continue to grow, smartphones continue to grow, Apple will eventually release a device akin to an iPod touch with a larger form factor.

As eBook devices proliferate and eBook availability continues to expand via Google’s new initiative and others, will consumers continue forking over $359 for an Amazon Kindle? I doubt it.

Who is certain to lose regardless of how the eBook future unfolds? Sadly independent bookstores. 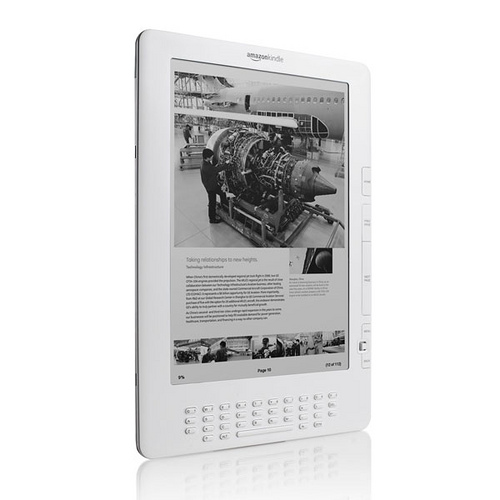