Josh Bernoff, co-author of Groundswell: Winning in a World Transformed by Social Technologies

, a book that I highly recommend, recently wrote a column for Advertising Age about how the term “media” in social media is tripping up many marketers and business executives who often associate media with being a one-way communication channel.

I thought Josh’s column was interesting, but what really surprised me was the vitriolic comments blasting social media as a fad and navel gazing. Here are a few selections:

– I want to tell you a story but social media doesn’t allow me much space so I have to go. bye! Wait, how “social” is that? In ten years I see a new industry that will teach people how to communicate.

– Tweeting, texting, blogging but never actually speaking to anybody. Maybe “social” needs to be replaced with “anti-social” as well.

– What is the perverse attraction of the Internet? Why do advertising and marketing people insist in discussing aspects of the Internet endlessly? Because it is all totally meaningless!

And, my absolute favorite:

– Do any of you people work for a living? Whatever you want to call it, this “social” thing is part narcissism, part anonymous communication (which is very much anti-social) and part work avoidance. No wonder why the economy is horrible, so many people are “socializing” at the big internet water-cooler and nobody is working.

Admittedly, Twitter has exploded into the media spotlight within the past 4 weeks or so, beyond any web app or technology in recent memory. Last Friday, of course, Oprah discussed Twitter on her show and launched her own Twitter account. Then, this week, on Wednesday, Twitter was mentioned in three separate New York Times stories in the same day:

In the Dining section, a woman in N. Ireland who tweets recipes.

Also from Dining, the restaurant critic from the Daily News is suing a guy who is pretending to be her on Twitter.

In the glare of media overexposure, it’s interesting to see the antipathy of the Advertising Age commenters. And, they’re not alone either, I’ve seen other comments comparing Twitter users to fat guys sitting in their parents basement Twittering in between dungeon runs in World of Warcraft. And, finally, there are many people who use the oft-repeated example, “Why the f*ck should I care what you’re eating.”

I’ll be the first to admit, I didn’t get Twitter at first. I glanced at the site, followed a few people, posted a tweet or two, but then didn’t really follow up. Now, I firmly believe that that first opinion had to do with the Twitter User Interface itself. Now, that I use a variety of Twitter desktop clients – Tweetie for Mac, Nambu or Tweetdeck – the power of Twitter revealed itself.

People can scoff or lash out at Twitter, but they may as well stick their finger in a dike and try to stop the evolution of communication technologies. Ever since Thomas Edison set up his laboratory in Menlo Park, New Jersey, and even before that with Leonardo Da Vinci’s many inventions, the progress of technology has marched forward unstopped.

Twitter, or some variant, will be with us for a long time to come. Instead of sending mass emails, then managing the chaotic back-and-forth email conversation, Twitter allows people to carry on discussions and conversations with a wide variety of friends and acquaintances, and manage that information flow in whatever style suits you.

And, the stereotype of someone Twittering their every thought and action during the day will eventually dwindle as well. Plenty of people dip in and out of Twitter for short periods of time throughout the time and join the conversation. Then, at the end of the day, they turn off their machines, and converse and break bread with friends or family members, in normal, well-adjusted conversations. And, many of those people will probably mention ideas or news that they were exposed to via Twitter. 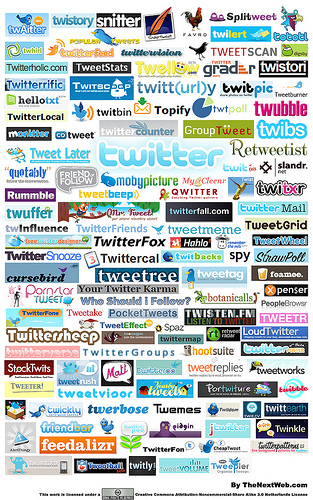